Michael A. Kornstein joined Cooper, Erving & Savage in 1978 upon his admission to the bar and became a partner in 1983. Mr. Kornstein’s practice is concentrated in the areas of banking, creditor’s rights, bankruptcy and real estate matters.

Mr. Kornstein represents several financial institutions and has actively participated in work-outs, foreclosures and bankruptcies for the past 31 years. Mr. Kornstein has represented the Resolution Trust Corporation and the Federal Deposit Insurance Corporation in several liquidation matters including the foreclosure of a building contained in a regional shopping center, a real estate work-out involving an office building located in the City of Albany whose rehabilitation was financed through the issuance of Industrial Revenue Bonds issued by the City of Albany Industrial Development Agency, and the foreclosure of several garden apartment complexes.

Mr. Kornstein has extensive bankruptcy experience in representing creditors, and on behalf of a local financial institution supervised the liquidation of Sounds Great, inc., a 14 outlet electronics retailer, which resulted in the retirement of a $3.7 million obligation owed to the Bank. Mr. Kornstein represented a financial institution in the Bennett Funding Group bankruptcy. 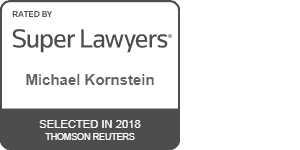